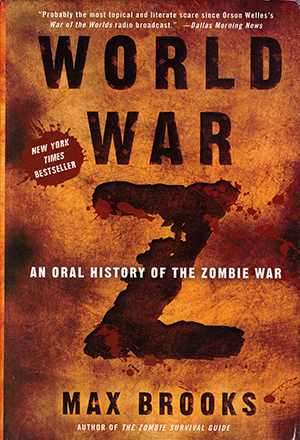 What sparked me reading it was watching “an agent of the United Nations Postwar Commission” ten years after the zombie war. As I read, in my head, I referred to him as “the recorder” because he barely was present, asking very few questions, the sections were just the verbal explanation of whatever the interviewee went through during the war.

Each section has a short introduction of where he took the interview and it’s state before and/or after the war and that’s where the scope of the book totally superseded the movie. Everywhere on Earth was taken into consideration, from a small town in America to Government officials in China, the amount of characters introduced covered every single twist, conflict, reaction, failure and result of such actions on the whole world.

It is written as if this war of zombies actually occurred, very believable as to what the governments would do, how the scientists would react, how consumers and millionaires would try and save themselves. Actually took into account the physicality of the zombies themselves, how you’d need to kill them, how they would freeze in the winter and how people could take advantage of that, even had described what was being done to eradicate the zombies which were in the oceans!

Overall it was an amazing book to read, one of my favorite books now. Since I love when fiction overlaps reality in such a precise way. Which is why my favorite book ever (so far) is Anne Rice, covers centuries of real history to incorporate her vampire characters to be believable. And I’d suggest to anyone who likes either of these books to pick up the other.

Tomorrow I’ll be posting the full video to my Yo

A very simple graphic liner look where I wanted to

Marc and I were going out with some friends for ju

I’ll be posting the actual video of me creating

I was inspired by some black-on-black nails I saw

Using gel nail polish in a neon green then regular

Yet more stills from recent makeup looks. Even tho