I have been meaning to post the picture of these for months and months now. Around early November of last year, I had the great idea to crochet simple and MANLY scarfs for all my coworkers. 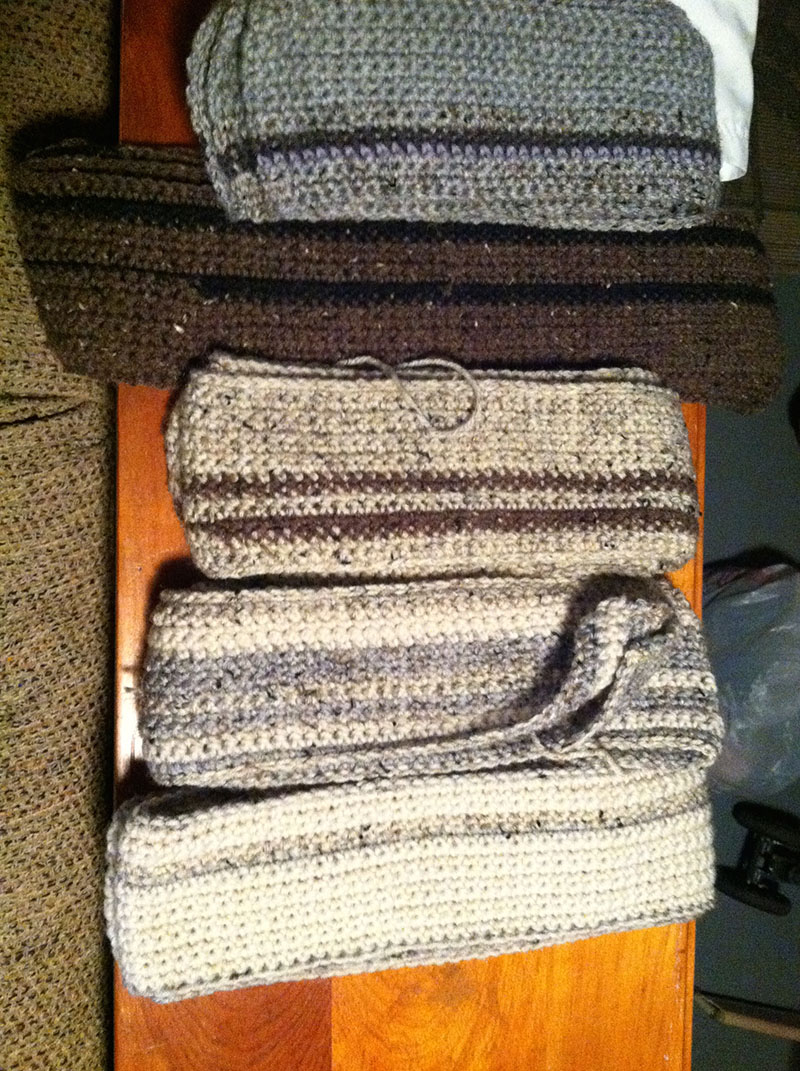 As a web developer I typically work in a very male oriented environment and I definitely asked around to see if crocheting something for them was really the way to go. I was looking for a project to just soak up my down time (my sad down/thinking time because around then I had just broken up with someone and moved back into my parents’ house). So I asked my uncle, who I had crocheted a similar scarf for one of the holidays previous, if he got use out of his scarf, if he ever got the weird feeling that it’s design or the actual material or pattern itself was too feminine. My uncle gave me the resounding no answer that I needed to really feel like these scarfs would make a great gift for my coworkers.

I crocheted about 8 of them I believe. At the time I was working at a very small company, so 8 scarfs was about a month and a half of crochet time and as I finished each one I checked a coworker of the list.

The idea was to keep them simple. I used only single crochet, because anything bigger gets loose and seems more effeminate to me for some reason, and I picked subdued tweed-esque yarns. I mixed a few of the yarns together to create a kind of easy going look. I also crocheted them horizontally, so I would chain forever to get them started, keeping in mind that a lot of my coworkers were so much taller than me, I didn’t want them to have short stunted looking scarfs, so the first row was really slow going, but would pick up the farther along I got.

Although I no longer work at that company, I know the guys there still wear the scarfs. Well not really still as it’s getting warmer out and who needs scarfs in the summer time! And I was really happy that they all were so appreciative of the work I put into them. So I really suggest if you’re at a place you enjoy or if you just have some male friends that you never have any idea what to do for them, making simple items that they can actually use are the way to go.

This site uses Akismet to reduce spam. Learn how your comment data is processed.

Full video on YouTube under my channel name Daniel

❄️ stills of the simplified and extravagant wi

Hope everyone has a healthy and happy New Years an

Pastel penises for Christmas ornaments 😆🍆 I