My boyfriend, Charlie, wanted me to tattoo him. I was skeptical about it, since well, relationships don’t necessarily last forever, and I didn’t want him to regret getting a tattoo from me, on his arm no less, that he’d be plagued with if we ever broke up. 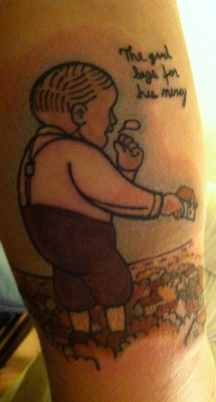 But he was very adamant about it and after a bunch of talking and blah blah about how he would always want the design whether or not it was me who tattooed it. We got down to the tattoo.

Now the subject matter he chose was a panel from the great graphic novel Jimmy Corrigan, the_Smartest Kid on Earth, which I actually wrote a thesis paper on during my college years in a class called “The History of Comics”. So I was happily pleased with the style and subject.

The line work needed to be thick, graphic, and expressive.
The colors needed to be muted and generally analogous, outside of the blue of the sky.

This tattoo, although only 3 inches high by 2 inches wide, on Charlie’s inner bicep, took about 4 hours to complete.

I mixed every color custom, which took up a whole bunch of time, but I wouldn’t have had it any other way.

No other tattoo I have ever done looks as painterly and no other tattoo makes me feel as proud and as successful as this one. I really got to let my color theory – loving brain shine. It was also a great experiment for me since, this was my first tattoo on Charlie and the first one I’ve done with entirely custom mixed colors. Generally, if I have the time, then custom color is the way I’d like to work from now on. 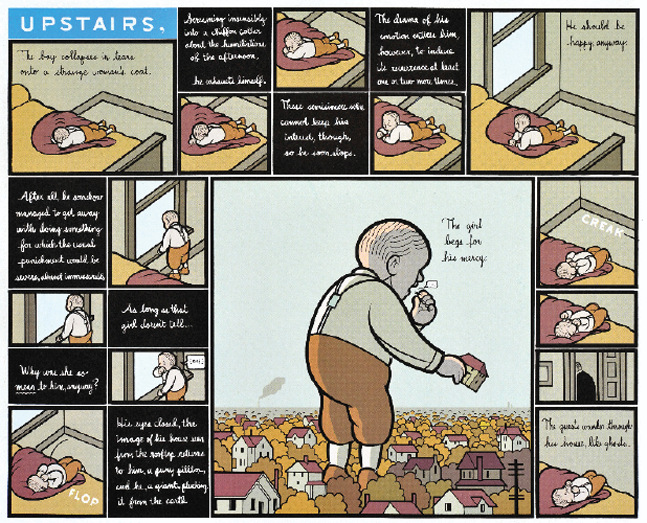 This is a horrible scan of the page the panel was from that I found via google search, really doesn’t show the real colors and impact this page has when reading it in real life.

Using a tiktok filter to check the color undertone

Cutting my nails down after gel polish started pee

Put together this little vid that links up with Yo

Not my favorite luck, but it did get me through my

I am so cheap!! I cannot let go of a dollar store

Lightning my roots with a bleach concoction that I